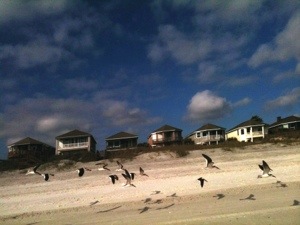 Over the last year and a half, I’ve learned how to walk along the beach without disturbing the gulls that gather in bunches up and down the coast. At first they flew whenever I got near them, but after awhile I discovered that if I approach quietly at a steady pace, and avoid making eye contact, most of the gulls (Ring Billed, Common, Laughing, or Herring) tend to walk toward or away from the water just enough to clear a path for me through the middle of the flock.

They might complain. The Laughing Gulls almost always do! But only the most skittish gulls take flight, frequently joined by the terns, and they usually fly only a few feet before dropping back down into the sand as I pass them by.

Black Skimmers are a different story. They visit our beach only a few months each winter and they fly as soon as I get anywhere near them, permitting me to accumulate numerous blurry photos that feature their tail feathers.

Last Friday as I walked north along the shore I repeatedly approached a flock of Black Skimmers. Before that day, I hadn’t seen more than four or five together, but this time over two dozen were gathered at the water’s edge. When I came within 10 feet of them they took flight as a group, first out over the water and then arcing back to the sand a little farther up the shore. When I caught up to them again, they took flight once more out over the surf and back to the sand a little farther ahead. This pattern was repeated a couple more times until the Black Skimmers dropped back into the sand with a similar size group of Sanderlings and a handful of Laughing Gulls.

As I approached this mixed flock, the Laughing Gulls squawked a bit and sidestepped into the water, the Sanderlings chattered and trotted farther inland, and the Black Skimmers once again took flight all together but this time they flew the opposite direction. Once out over the surf, the Skimmers turned south and flew behind me. For a moment I thought they’d figured out that I wouldn’t disturb them any more if they let me get past them and then dropped back down with the gulls and the Sanderlings.

But that wasn’t their plan. Instead they circled behind me on the right, flew up alongside me on the left, and then on up ahead, landing beside the water once more about 20 yards in front of me. We resumed our previous pattern with the Skimmers flying on down the coast each time I approached and remaining just out of reach, until I arrived at the walkover where my car was parked and left the beach. As I got into the car and headed home I wondered how many times we would need to do that same dance before the Skimmers got used to me like the gulls and terns have, and simply moved off to one side, complaining, as I passed by.

Creativity frequently eludes me much like those Black Skimmers. I’ll catch a glimpse of a new idea, a fresh connection, but as I approach it takes flight, wheeling out over the ocean of thoughts in my head, and sometimes circling back around me before landing just out of reach. I have to be careful not to make any sudden moves, loud noises, or eye contact, until the new idea and I have had a chance to feel each other out a bit, grow accustomed to each other, and convince ourselves that neither poses a threat. Only then can I get a good look, and maybe even snap a photo or two.