We find a lot of shark teeth on our beach walks. And by “we” I mean other members of my family. Not me. I’m not a shark tooth finder or even hunter (unless you count the teeth still in that shark I rescued, which I don’t). I’m slightly better but not terribly lucky with sea glass. My beach combing super power is spotting half buried sand dollars and dusting them off to reveal they are perfect and complete. 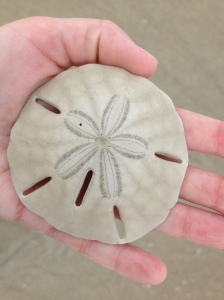 Another day, another dollar

My husband is the shark tooth king of our family. He’s found hundreds in the last couple of years. Most of the teeth he collects are from sand tiger sharks–long and narrow and dark. He also finds teeth so tiny that they look to me like a fragment of broken shell, or maybe a bug in the sand. There’s no tooth too small for his eye, it seems. But he’s still hunting for a big one.

My daughter is the sea glass queen and shark tooth princess. She doesn’t gather many shark teeth but she found one bigger than any my husband has picked up–a likely juvenile great white tooth about 1 1/4 inches long that she now wears as a pendant. Since she found it he’s been on the hunt for a larger tooth, claiming he’ll be the first of us to find one from a Megalodon.

He might still do that. But neither he nor our daughter currently hold largest tooth found honors in our family.

Weirdly, unpredictably, and still unbelievably, that honor belongs to me.

It would never have happened if I’d been walking the dog.

Our yellow lab, Quincy, now 8 months old and more than 70 pounds, is a handful. When he’s calm and his puppy brain is switched fully on he is a perfect gentleman on a leash, but when he’s distracted by sand and water and waves and gulls and other dogs (read: anywhere near the beach), he goes puppy deaf to voice commands and requires a strong hand at the other end of the leash. Consequently my husband does most of the dog walking, which isn’t compatible with scanning the sand for triangles.

I wasn’t scanning the sand either, at least not beyond making sure that I wasn’t going to step on something sharp or jellied. But off to the side of my left foot, I saw a dark glint.

Over the winter several pieces of fossilized bone have washed ashore on our favorite beach. We’ve collected numerous bone chunks of various sizes. We aren’t sure what we want to do with them–beyond piling them on every surface next to our whelk shells and sand dollars of course–but we keep gathering them anyway. I thought the glint I caught was another piece of bone until I touched it.

It was definitely not bone, fossilized or otherwise.

Only an inch of what turned out to be the center the smooth dark object was visible. All edges and ends were covered with sand. I brushed off the root end first, and then quickly picked up what I knew had to be a tooth.

But I was having trouble believing it.

I would have had trouble believing I had found any size tooth, since it was my first in nearly three years of walking these beaches. But my disbelief was bigger because the tooth I’d found was huge.

I am now the proud and happy wearer of a 2 inch long, 1 1/4 inch wide at the root, great white shark tooth pendant. It’s gaudy big and heavy and I’m not a big necklace person but I wear it anyway. I treasure my gift from the sea.

The last time I wore it to the beach a stranger stopped me and said “You didn’t find that here, did you?”

Yes I did, about a quarter of a mile down the beach, on an ordinary day, when I wasn’t even looking. I tell people I nearly tripped over it but honestly I almost passed it by. If it wasn’t for the glint and my willingness to look closer, that tooth would have been someone else’s find. This would be someone else’s story.

I’m glad it’s mine. But more than that, I’m glad I’ve learned to look for the story beyond what is first visible.

A million years ago when I first started writing, I thought that stories and creative ideas were born fully formed like babies. Sure they needed to be nurtured and to grow into their adult form, but they basically were what they appeared to be at their birth.

Sometimes that is true. But often it’s not. And if we don’t explore beyond what we readily see, or hear, or smell, or feel, or think–if we don’t test the boundaries and look below and beneath and behind–we risk not knowing.

We miss the joy of what if.

Is what we saw what we really got? Was there more to the story? What came before? Who else was involved? What more could we learn? What does it mean? Where next?

This is true for everyone and every day life. But it’s extra true for writers and artists. It applies to creators of fiction and nonfiction alike, to both entertainment and education, and in business as well as our personal lives.

The key to not missing out on the more is slowing down. Take a longer look. Brush away the sand.