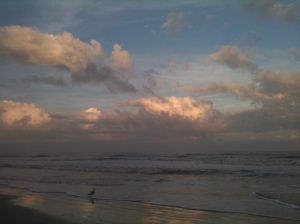 Are you out there Mary Lee?

Local news has been excitedly giving shark play by play for the past week. Two female great white sharks tagged by Ocearch near Cape Cod last September have been pinging just east of Jacksonville. The smaller shark, 14 ft long Genie, has stayed well off shore, passing her time along the Gulf Stream. But the big girl, Mary Lee, who is 16 feet long and weighs more than 3000 pounds, has been hanging out much closer to shore, actually pinging within the surf late in the day on January 7th. That’s when Ocearch notified local police and Mary Lee became the topic of conversation around town, almost as if she were the first shark ever to visit our shore.

That’s also when I became addicted to the Ocearch tracking website. Imagine how thrilled I was to discover that when Mary Lee pinged closest, she was just off shore from where I typically access Jax Beach! If only I’d been walking then I might have seen…well nothing actually, because it was dark when she was that close.

I’ve seen a lot of interesting things in the water as I’ve walked the beaches here over the past year. I’ve seen dozens of dolphins, feeding and playing in the surf, and scaring uninformed people who can’t tell the difference between a dolphin fin and a shark fin. I’ve seen what must have been a good sized sea turtle but I was too far away and it was too dark to be sure. And one especially wonderful evening during high tide I watched a couple of manta rays feeding just a few feet away from where I and several other beach lovers were gathered at the water’s edge, oohing and ahhing and reassuring some idiots walking by that no, really, those were not sharks.

I know a lot of people have a strong fear of sharks, and I’m not interested in a close encounter with one myself, but they are not every unidentified swimming creature in the sea, or the only ones to avoid. Jellyfish, for example, can be very unpleasant, but there aren’t near as many movies about them and I don’t hear a lot of people pointing and yelling “jellyfish” when they see something in the water.

Sharks are clearly made out to be the bogeymen of the sea, but the sea is their natural habitat and they are doing what sharks were born to do–swim and eat. They are merely one more type of ocean and coastal life to observe, no different than the dolphins, sea turtles, pelicans, gulls and osprey.

There are plenty of sharks out there that we don’t see or hear about, many more than the two great whites that Ocearch recently named and tagged. Local surfers complain about a bull shark that frequents the area near and just south of the pier. We also have black tip sharks in these waters, but for the most part, this apparently isn’t a place where a lot of shark encounters occur. It may be a long time, and a lot of walks, before I get a glimpse of a shark in local waters.

That’s ok. I don’t mind waiting. They’re out there, somewhere, along with their untagged friends. The great thing about Mary Lee pinging near the Jax Beach shore is the reminder that just under the surface, just out of range of our everyday experience, is a world we cannot see without effort, risk, or technology.

Beneath those beautiful breakers there is a world of life that carries on without our observance or assistance. It is the same with creativity, be it any type of art, music, or creative writing. Behind those layers of paint, that sculpted curve in clay, that delicate note, and that well-turned phrase, is a combination of observation and imagination, born of the knowledge that things aren’t always as they seem, and the courage to explore and express what is found.